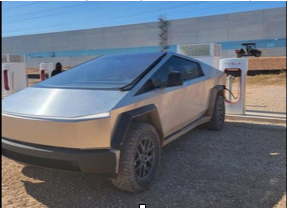 Tesla delivered the first electric Semi trucks to PepsiCo at a special event at Giga Nevada on Thursday. While that was big news five years in the making, Elon Musk also revealed some big news about the Cybertruck. During the event Musk and Dan Priestley Sr. Manager, Semi Truck Engineering at Tesla shared various specs of the electric semi, one of which was its charging capacity, confirming our previous reporting that it will be over 1 megawatt (MW) from their Mega chargers.

That is an impressive increase over the current V3 Superchargers which deliver one quarter that amount, or 250kW, although that is expected to be unlocked to over 300kW soon. While the delivery event didn’t contain a “one more thing” like previous events, Musk did drop the news that the Cybertruck will feature the same 1MW+ charging technology as the Semi. Priestley then added that it will be coming to Superchargers next year, which we presume will be the V4 Superchargers that we previously reported on and have seen popping up in building plans for future Supercharger stations..

Musk also said the Semi’s 1,000-volt architecture will be coming to other future passenger vehicles, but did not specify which ones. Tesla is able to achieve over 1MW thanks to their new immersion cooling technology which allows them to deliver such high speeds without the need for a massive charging cable. In fact, based on the image shared during the presentation, it appears as though it will be the same form factor as the existing V3 Supercharger cable. Fastest Charging Electric Cars in 2022 We don’t know when the first V4 Supercharger will appear, but we do know that the Cybertruck is supposed to enter production in mid-2023, and Tesla appears to be on target with that schedule with recent job posting for the Cybertruck production line.